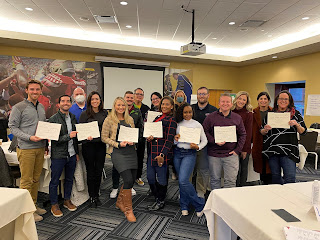 I completed a certificate in Principles & Techniques of Fundraising at the Indiana University Lilly Family School of Philanthropy today. Learned a lot and thankful to have had this opportunity!
Posted by Margaretha Geertsema-Sligh at 5:16 PM No comments:

Dr. Margaretha Geertsema-Sligh has been named the Interim Dean of Butler University’s College of Communication (CCOM), effective April 1. Geertsema-Sligh has served as Director of the Eugene S. Pulliam School of Journalism and Creative Media since June 2016.

Geertsema-Sligh joined Butler in August 2005 as an Assistant Professor and received tenure and promotion to Associate Professor in 2011. She was promoted to Professor in 2017 and holds the Richard M. Fairbanks Chair of Communication. She served as Director of Global and Historical Studies for four years before her appointment as Director of the Pulliam School of Journalism and Creative Media. Geertsema-Sligh’s teaching and research focus on global media, gender and news, and global women’s issues.

“I am delighted that Margaretha is stepping into this new role as Interim Dean and I know that she will provide excellent leadership for the college during this time of transition,” says Dr. Brooke Barnett, the current CCOM Dean who was recently named Butler’s Interim Provost and Vice President for Academic Affairs. “She has already made a tremendous impact as Director of the Pulliam School of Journalism and Creative Media and I look forward to seeing the ways she continues to shape and support the CCOM community.”

During her time as Director of the Pulliam School of Journalism and Creative Media, Geertsema-Sligh provided leadership for majors in Creative Media and Entertainment, Journalism, Music Industry Studies, Sports Media, and Web Design and Development. She worked closely with faculty in each of these programs to implement curricular changes over the past years. In addition to her work as Director, Geertsema-Sligh served as chair of CCOM’s Professional Standards Committee, International Committee, and Diversity, Equity, Inclusion, and Intercultural Development Committee. She was also a member of President James Danko’s Faculty Advisory Committee.

“I am excited to serve CCOM as the Interim Dean until a permanent Provost has been appointed,” Geertsema-Sligh says. “I definitely have some big shoes to fill with Dr. Brooke Barnett’s move to the position of Interim Provost. I look forward to working closely with the talented faculty and staff of our college to ensure the best experiences for students in all the CCOM majors and across the University.”

Interim Dean of College of Communication

Posted by Margaretha Geertsema-Sligh at 9:00 AM No comments:

I found out today that I was recognized as a Faculty Research Star at Butler University for 2019-2020. Very happy and thankful! 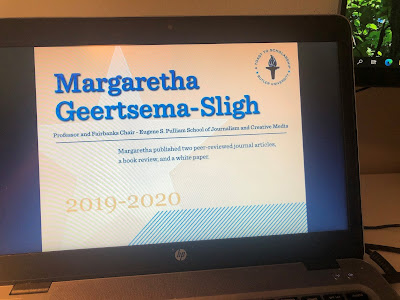 Posted by Margaretha Geertsema-Sligh at 3:10 PM No comments:

Excited to be part of the first Leadership Academy of the Independent Colleges of Indiana. This picture was taken in March, right before the COVID shut down. Since then, we have been meeting virtually as a group. A wonderful cohort! 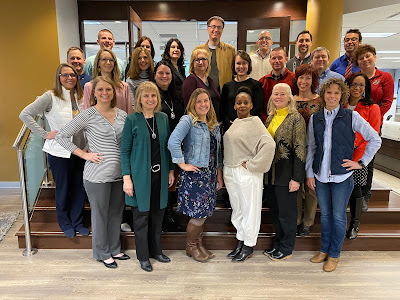 Posted by Margaretha Geertsema-Sligh at 9:30 AM No comments:

An article by myself and my co-author, Nancy Worthington, just appeared in Journalism Studies. Here is a link: https://www.tandfonline.com/doi/full/10.1080/1461670X.2020.1827969
Abstract: Almost 20 years after South Africa’s formal transition to a democracy, South Africans of all races were consumed by the murder trial of former Paralympic champion Oscar Pistorius, who shot his girlfriend, Reeva Steenkamp, on February 14, 2013. This article analyzes how the Times Live website in South Africa constructed identity discourse related to Oscar Pistorius, Reeva Steenkamp, and her mother, June Steenkamp, from 2013 to the conclusion of his final appeal in 2018. Drawing on theories of intersectionality and news as myth, we perform a critical discourse analysis of 208 articles to illustrate how these constructions serve primarily to reassert hegemonic discourses of gender, race, class, sexuality, and ability, but also to occasionally challenge those discourses. We found that several representations conformed to established myths: Pistorius as both the Victim and Trickster, and Reeva Steenkamp as the innocent Victim. June Steenkamp was initially constructed as The Good Mother and Victim, but news coverage later presented her as a villain because of her perceived greed. We conclude that enduring news values and economic imperatives foster editorial practices that sustain existing power relations despite efforts to transform and decolonize the newsroom.
Posted by Margaretha Geertsema-Sligh at 8:13 AM No comments:

Today, I attended Butler University's Virtual Fall Academic Workshop that focused on anti-racism. Several good sessions, but the highlight was the Q and A with Dr. Ibram X. Kendi, moderated by Dr. Brooke Barnett of the College of Communication. Dr. Kendi argued that just as research, teaching, and service are required for promotion and tenure, diversity work should also be required. We ended the day by individually reflecting on our commitment to anti-racism through personal and professional development.

Posted by Margaretha Geertsema-Sligh at 4:03 PM No comments:

I have decided to use the book Journalism, Gender and Power edited by Cynthia Carter, Linda Steiner and Stuart Allan in my Gender and News: Global Views class this semester. This book came out in 2019 and is fully updated from the 1998 version. Excited! 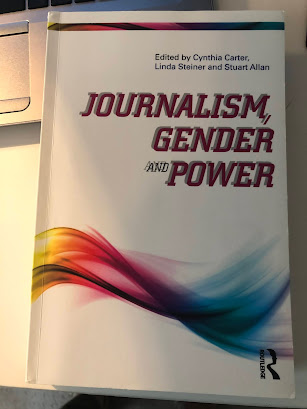 Posted by Margaretha Geertsema-Sligh at 1:02 PM No comments:

My contribution on newsroom cultures was just published in the International Encyclopedia of Gender, Media, and Communication. Below is the abstract:
Newsroom cultures around the world are dominated by a masculine culture. This is not only because men make up the majority of news workers, but also because of established news values and news routines. Men entered newsrooms long before women did, and women are still considered to be outsiders in what has been described as a “blokey,” “macho,” or “locker room” culture. Women are often expected to cover less important soft news stories, while men cover hard news. Men dominate at the top levels of newsroom hierarchies, with women facing the glass ceiling and unequal pay. Long working hours are a deterrent for female journalists, who often are also responsible for taking care of family members and children. Women face physical and online harassment, as well as sexual harassment, and are often judged on their youthfulness and appearance. Future studies should focus more on intersectionality as well as the experiences of nonbinary people.
Posted by Margaretha Geertsema-Sligh at 3:46 PM No comments:

The Summer of Webinars

I have been spending time this summer on what Butler University calls Pivot Pedagogy, basically preparing us for a very uncertain fall semester. In addition, I have attended several workshops on diversity, inclusion, and equity -- so important at this time. 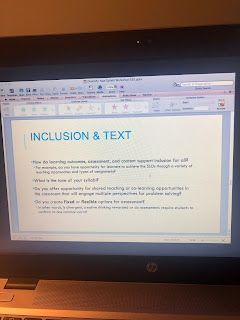 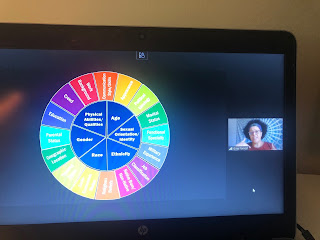 Posted by Margaretha Geertsema-Sligh at 3:56 PM No comments:

Working from Home in Uncertain Times 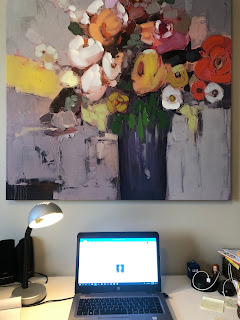 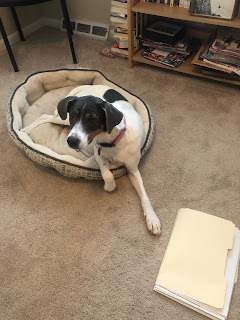 Posted by Margaretha Geertsema-Sligh at 2:48 PM No comments: