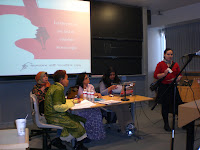 The conference featured two panels that focused on women and news in a global context.

The first was "Women Reporting from the Global Frontlines," with journalists Huda Ahmed (Iraq), Jenny Manrique Cortes (Colombia), and Peta Thornycroft (Zimbabwe). These panelists reminded me of the important political function of journalism at a time when the United States seems to enter a post-journalism, all blogging-and-user-generated-data era. All three journalists risk their lives to find and publish information the world should know.

But many stories remain uncovered, and they often deal with issues that impact women. For example, Ahmed said one of the uncovered stories in Iraq is the large number of single women and the increase in temporary marriages. Another is the spread of cholera and the problem of corruption.

Thornycroft is one of a few remaining independent journalists in Zimbabwe, and she works under incredibly difficult circumstances: no TV, no electricity, no press freedom. Journalists need a license to work legally in Zimbabwe. Children haven't been to school for more than two years. A colleague was abducted and charged with terrorism. Yet, Thornycroft said even though the United States has no business interests in Zimbabwe, the U.S. taxpayer is keeping two-thirds of people in Zimbabwe alive.

The second panel was titled "Global Citizens, Global Journalists: Women Journalists Organizing Around the Globe." We heard Parveen Sultana Jhuma talk about a Centre for Women Journalists in Bangladesh and the work they do from Dhaka. We heard Lily Yulanti Farid talk about her project for citizen journalism in Indonesia. Finally, Raziah Mangala Shekar from the Tanzania Media Women's Association talked about projects against FGM and corruption, and the African Union's goal of women representing 50 percent of government.

The Global Fund for Women supported these panels.
Posted by Margaretha Geertsema-Sligh at 7:44 PM