The future of Islam with Reza Aslan 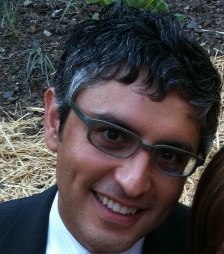 Reza Aslan, Iranian-American writer and speaker, challenged an audience at Butler University last night to determine what kind of America they wanted to live in. He spoke as part of the university's Religion and World Civilization public seminar series.

Aslan urged us to think about what it means to be an American and whether we wanted to live in a society where the right to freedom of religion is violated. Increasingly, Islam is otherized -- made to look foreign, exotic, and unAmerican -- in a nation that is by far the most religiously diverse in the world, he said.

He blamed conservatives such as Pamela Geller, Robert Spencer and Newt Gingrich for the growing negativity toward Islam in the United States.  According to Aslan, reasons for the anti-Muslim sentiment include the bad economy and war weariness.

Huntington's idea of a Clash of Civilizations has been thoroughly debunked but made a return after 9/11, Aslan said. However, the idea of one "Islamic civilization" is ridiculous.

Aslan concluded that while education is helpful in informing people about Islam, the real answer to changing opinions is in building relationships.
Posted by Margaretha Geertsema-Sligh at 2:23 PM