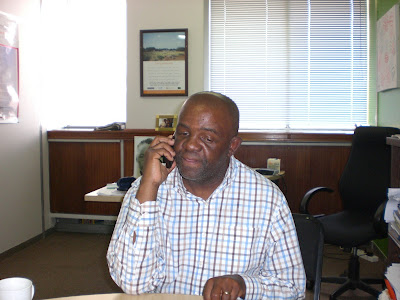 During my recent visit to South Africa, I had the privilege of meeting Mbuyiselo Botha, government and media relations manager at the Sonke Gender Justice Network.

We had a stimulating conversation about the meaning of manhood and questions of culture. For example, Mbuyisele believes polygamy is an accepted cultural practice, but that problems arise when people do not follow the traditional rules of polygamy.

When a man moves outside of these rules, he violates the relationship to his wives and may expose them to HIV/Aids. He also questions a man's ability to look after multiple children.

Sonke made headlines when it took Julius Malema, expelled leader of the ANC Youth League, to the Equality Court in 2010. Malema was found guilty of hate speech for statements he made about President Jacob Zuma's rape accuser and rape victims in general.

Posted by Margaretha Geertsema-Sligh at 11:49 AM