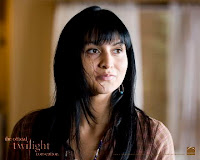 One of the most interesting papers I heard at the recent AEJMC conference was Meenakshi "Gigi" Durham's research titled "Gender violence in the Twilight phenomenon: A feminist analysis of blood, lust and love." Durham uses a feminist and semiological approach in her analysis of the first two novels, "Twilight" and "New Moon." The severe scar on the face of Emily, the girlfriend of a werewolf, prompted Durham to look deeper into the series after the she went to see the film with her young daughter.[I found a blog post on Feministing about domestic violence in "New Moon".]

I agree with Durham that the series promotes regressive ideas about gender and perpetuates the idea that a woman shows loyalty when she stays with her man, even if he attacks her violently. It is a mystery why so many girls are fanatical about the film.
Posted by Margaretha Geertsema-Sligh at 3:46 PM